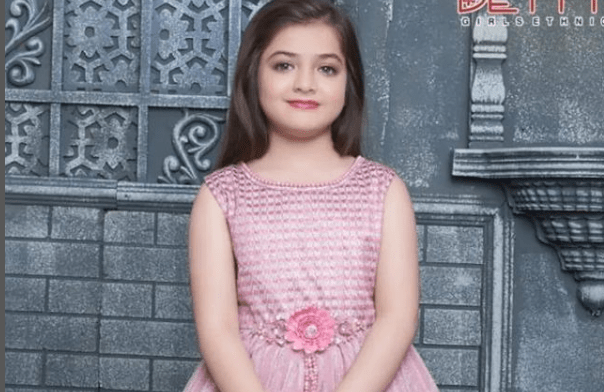 Puvika Gupta Age, Family, Bio, Wiki: Puvika Gupta is an Indian child TV actress who is better known for her tremendous roles in Hindi TV serials such as ”Ishq Subhan Allah”, ”Shaadi Mubarak”, ”Yeh Hai Chahatein”, ”Teri Meri Ikk Jindri”, etc. She is in the acting industry since 2019. Besides this, she has signed for the upcoming Bollywood movie ”Tejas” starring Kangna Ranaut, Varun Mitra, and Anshul Chauhan. In January 2021, she appeared in a commercial ad for HDFC Bank.

In addition to this, she is constantly active on the social media platform Instagram, where she has amassed more than 40k followers. She mainly uploads reel videos with co-actors on Instagram.

Puvika Gupta was born on 16 December 2014, in Mumbai, Maharashtra, India. She was passionate about acting since childhood. At the age of 5, in 2019, Puvika made her acting debut with Zee TV’s romantic drama series ‘’Ishq Subhan Allah’’. There she played the role of Firdaus and appeared till 2020. Between 2020 to 2021 she featured the character of Junior Preti on Star Plus’ serial ”Shaadi Mubarak”.

Moreover, in 2021, she appeared in the ‘’Yeh Hai Chahatein’’ TV series as Anvi, which was also aired on Star Plus. In the same year, she featured 39 episodes in the ‘’Teri Meri Ikk Jindri’’ serial. In 2022, she began appearing as Junior Neeti in the Voot series ‘’Parineeti’’. She also has made guest appearances in ALT Balaji’s ‘’Broken But Beautiful’’ web series (2019) and ‘’Naagin’’ (2022) TV series. Scroll down to get information about Puvika Gupta’s Biography, Wiki, Age, Height, Net Worth, Family, and more.

Puvika Gupta’s age is 8 years (as of 2022). She celebrates her birthday every year on 16 December alongside her family and friends. Her zodiac sign is Sagittarius.

Puvika Gupta’s height is about 3 feet 11 inches and 40 KG in weight. While her hair color is light brown and her eyes color is hazel.

Talking about Puvika’s family, her father’s name is Neeraj Gupta. She has two siblings an elder sister named Gunina Gupta and a brother named Vikas Kapoor. Puvika has shared his family pictures on her Instagram account.

Puvika Gupta is an Indian child TV actress, who was born on 16 December 2014.

How old is Puvika Gupta?

When is the Birthday of Puvika Gupta?

Where is the birthplace of Puvika Gupta?

What is the Height of Puvika Gupta?

How much is the net worth of Puvika Gupta?

Puvika Gupta’s net worth in 2022 is estimated to be more than 30 Lakh Rupees.